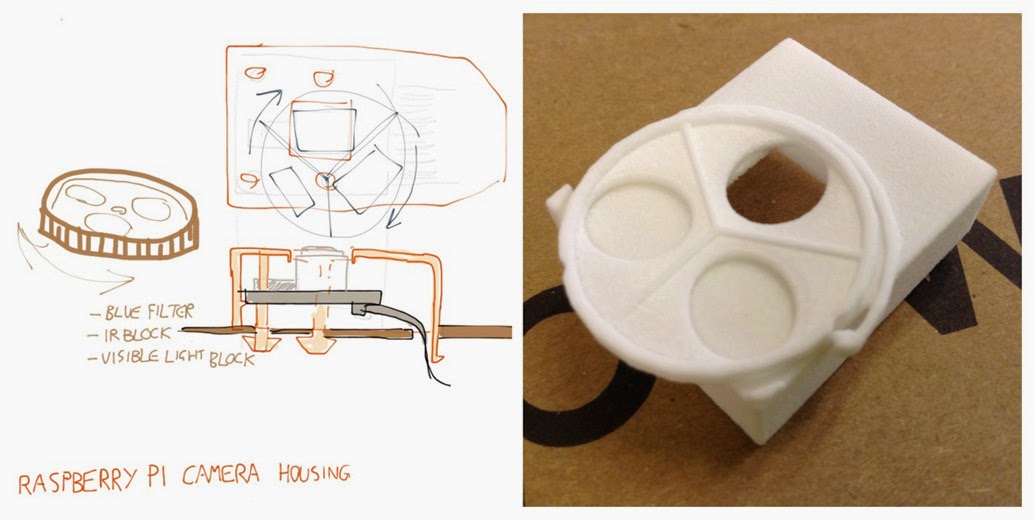 The CCD and fixed focus lens is housed on a separate circuit board connected to the motherboard via a 15cm ribbon cable. A shorter cable has been ordered from Pimoroni,a specialist Raspberry Pi supplier. The lens enclosure was modeled in SketchUp using the Raspberry Pi reference data for the camera dimensions, allowing for an enclosure that holds the CCD and lens firmly, while allowing for three filters ( high pass, low pass, and blue) to be swapped out in front of the lens.

The model was then exported to OBJ file format and uploaded to ShapeWays, a Dutch 3d printing service, who printed it in laser-sintered Nylon 6. A $25 discount from a customer satisfaction survey bought the cost for the print down to R45. Following verification and testing, this part will be made available for other users toprint.

An IR block filter, blocking out IR light and allowing only visible light through, is sought. Suppliers on eBay produce filters for astronomical imaging that may be suitable. Two layers of exposed black and white film have traditionally been used as a filter to block out visible light and allow infrared light through. The blue filter, for monitoring vegetation health, is supplied with the camera.